The Taínos were a resourceful people who used minimal technology to traverse the Caribbean Sea from South America using dugout canoes. The significance of their canoes cannot be overstated. Canoes were part of their daily lives but also important for ritual, ceremony, and voyaging. Although it seems incredible, they were able to use large canoes to springboard from the mainland to populate the numerous islands in the Caribbean to form unique groups, customs, and cultures among themselves. 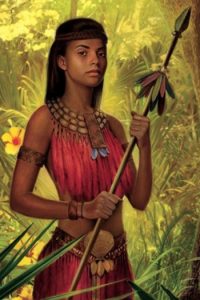 Who were the Taínos?

The Taínos were an indigenous group of people, who where a subset of Arawak Indians. They lived in the Caribbean region in Cuba, Hispaniola (what is now Dominican Republic and Haiti), Jamaica, Puerto Rico, and the Lesser Antilles. Mostly a peaceful group, they were the native peoples who Christopher Columbus encountered when he first arrived in the Dominican Republic. They lived in groups ranging from about 2,000-3,000 people headed by a leader, and they numbered around 3 million at the end of the 15th century. However, they were essentially wiped out after the Spanish conquest and introduction of disease, slavery, and slaughter. 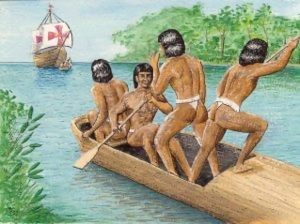 “They go with incredible speed:” Taínos and their canoes

How did people cross a body of water that is slightly larger than the Mediterranean
Sea and the 7th largest body of water in the world to reach distant islands?
The Taino people are a fascinating example of the ingenuity and resilience of humanity, for they navigated deep waters in dugout canoes, leaving the relative safety and security of the mainland in South America to traverse lands unknown. In this article, we’ll explore who the Taino people were, the importance and function of their canoes, and how they used them to navigate from Colombia and Venezuela to the Greater and Lesser Antilles.

The Importance of the Canoe 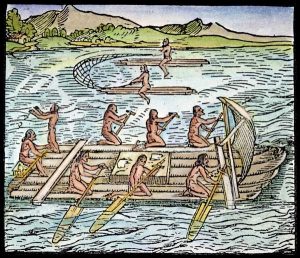 The Taínos were farmers and fishers, and their canoes were some of their most prized possessions, for its wide variety of uses. They used canoes for fishing, (deep sea and freshwater in lakes) trading, travel, exploring, water sports, war, ceremonies, raiding, communication with local islands, and daily transportation.

Because there wasn’t any large game on the islands, the Taínos were skilled fisherman. In deep sea fishing, they would attach a smaller fish to a line, fixed to the canoe, and wait for a larger catch. The fishermen would then dive into the water to help retrieve the catch. The Taínos also fished in freshwater or mangrove forests, collecting mussels and oysters. Finally, they would fish in the rivers, using poison obtained from local plants to stun the fish long enough to collect. (The poison didn’t affect the fish’s edibility.)

However, canoes weren’t just objects of function. The Taínos took great pride in decorating and adorning them. From records left by Columbus, we know that canoes were painted and decorated with metal, and made into beautiful works of art. In many ways, the canoe symbolizes the Taíno way of life. In fact, the word “canoe” originates from the Arawak language, “canaoua.”

How did the make the canoes?

The Taíno canoe was made from a single tree. They would fell the trees or burn them at the base; then, they would hollow out the log with stone axes and with fire. This was a slow progress, and they would eke out a little at a time along the hull until it reached the final shape. Some accounts state that the canoes could carry up to 150 people, but the average large vessel seems to have been around 40-60 people. However, the Taínos crafted canoes to fit anywhere from one person to 100. The large canoes were used for deep sea fishing and trade among the individual islands, while the smaller, personal canoes were for daily use.

The size of the canoes depended on the size of the tree, and as such, they weren’t very wide, but some reports state that the canoes could reach sizes up to 100 feet and 8 feet wide. The Spanish admired the speed and maneuverability of the vessels, and Columbus noted that they could outpace a Spanish barge, saying, “They go with incredible speed.”

Part of their swiftness was due to the paddles they used. Although very little evidence is left to historians and archaeologists, some artifacts point to the variety and function of paddles. On average, they were about 2.5 feet long, and may have been carved with decorations to describe the person’s particular social status. The shape of the paddle depended on function. For example, short paddles were used for relatively still waters (such as the shallows), whereas sharp-bladed paddles were for quick strokes to achieve maximum speed in open water. The Taínos would paddle from a kneeling position in the canoe, which provided stability in the unsteady open water.

Some scholars have argued that the Taínos might have used sails in their canoes, but the majority consensus is that this is unlikely. Sails would have been bulky, creating more weight than necessary, upending the balance of the vessel. Therefore, historians have concluded that they were powered with human strength, along with aid from water and wind currents. 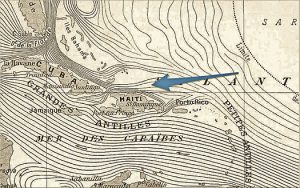 How did they navigate?

The best estimate that historians and archaeologists have is that the Taínos traveled from Colombia and Venezuela from 1200-1500 AD. (There is some debate about whether they journeyed from Mesoamerica, although it is unlikely.) Although it seems remarkable that a pre-Colombian people, who did not use compasses, magnets, or sundials, could make the hazardous voyage from South America to the Caribbean islands, certain factors made it distinctly easier.

For one, the weather in the Caribbean is fairly stable (apart from hurricanes). Winds were predictable, and so were the water currents. Without getting too technical, the water currents in the Caribbean naturally form an aquatic highway of sorts. Think of the speed walkers in airports or escalators: the currents, along with the ability to row as a cohesive whole in groups, greatly speeded their travel.

In addition, the Taínos were able to take advantage of the predictability of the weather to plan their long-distance travels, undertaken mostly from March to August. They were able to use the North star and the constellations as a guide to reach the islands across the sea. Furthermore, the islands are relatively close together, allowing for ease of trade and communication. In this way, the sea functioned as a great connector between individual Taíno tribes.

Curious about the daily life of the Taínos? With the Taíno Canoes activity, you’ll be transported back in time to experience the world of the indigenous peoples of the Dominican Republic.

The canoe was arguably the most important part of the lives of the Taínos. With it, they fished, traveled to smaller islands, communicated with other tribes, and visited shamans for rituals, healing, and prophesy. At Booking Adventures, we want to immerse you into the world of the Taínos.

In this activity, you’ll set out in the hand-crafted canoes, just as the Taínos did. You’ll hear many of the sounds that marked their connection with nature: the call of cranes, the dip of crabs into the water, and the gentle lapping of waves against natural rock formations. The arches of the mangrove roots will remind you of cathedrals, and indeed, the Taínos (although they didn’t have churches) were deeply spiritual. Once you’ve set out with our guide, you’ll enjoy the rich variety of birds, reptiles, and fish of the mangroves. Be dazzled at the sparkle of the waves winking in the morning light, the mountains of Samaná in the distance, and the emerald green of the swaying palms.

In this tour, our expert guides will describe the many uses of the canoe, how the Taínos lived before the time of Columbus, and how the mangrove forest is essential for the health of the environment.

Are you ready to live the Taíno experience? Click here to book your next adventure!